by Steven J. Rosen (Satyaraja Dasa) As a teenager coming of age in the 1960s, I was preoccupied with spirituality. I had become disinterested in the mainstream religion of my forbears, and I was passionately looking for a path that spoke directly to me as an individual. I didn’t want some amorphous, otherworldly transcendence, either […]

The Unheard World of Sound

Human beings are physically unable to perceive certain portions of the known vibratory spectrum. While extremely sensitive to sound waves of about 1,000 to 4,000 cycles per second (cps), man is all but deaf beyond 20,000 cycles per second. Dogs and cats, on the other hand, can hear up to 60,000 cps, while mice, bats, […]

For countless ages, seekers have journeyed to the Ganges, or to similar holy places, to absorb themselves in sacred mantras, hymns that have been passed down for generations. These same seekers would often perform kirtan, celebrating special mantras with song and dance. Much to our good fortune, through the Herculean efforts of His Divine Grace […]

Kirtana Yoga and the Maha-mantra 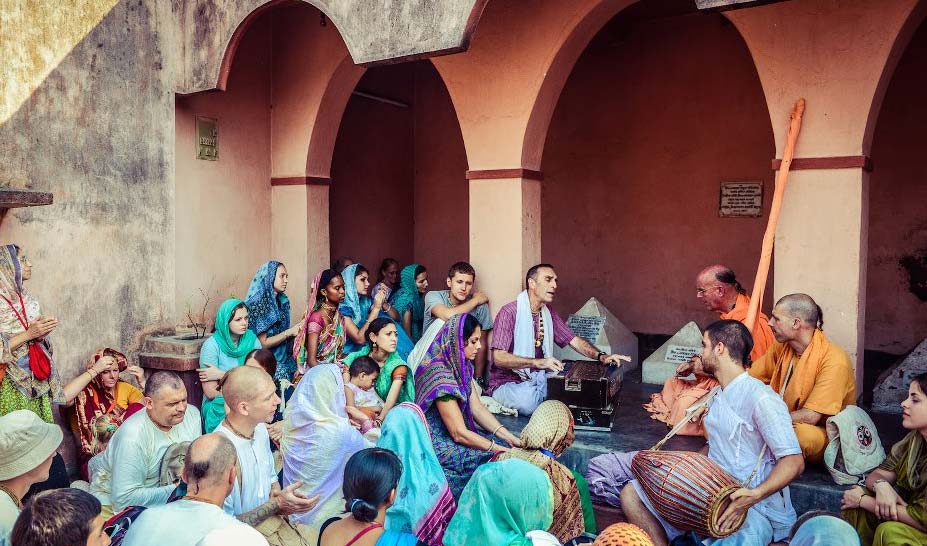 Kirtan in the World Religions

Kirtan is the call-and-response form of chanting that characterizes the Hare Krishna movement. It is the fundamental religion of the age – the soul crying out for God as a means to reunite with Him. Robert Gass, author of Chanting: Discovering Spirit in Sound, believes that ritual chanting is among the most universal of human […]

Kirtana (pronounced keer-ton-uh) is a Sanskrit word that means “praise” or “glory.” The more common Hindi pronunciation is “keer-ton,” dropping the final “a.” Simply understood, it is a form of song that centers on glorifying God, commonly performed in a “call and response” style of singing. There is Nam-kirtan, which are songs composed of God’s […]

Bada Haridas artistically weaves together his many influences, creating unique music for his kirtan chants. As a sincere practitioner of bhakti yoga, there is a depth to his music and a quality of his singing that is both inspiring and healing.